Published by Stefan Engeseth on december 22, 2014 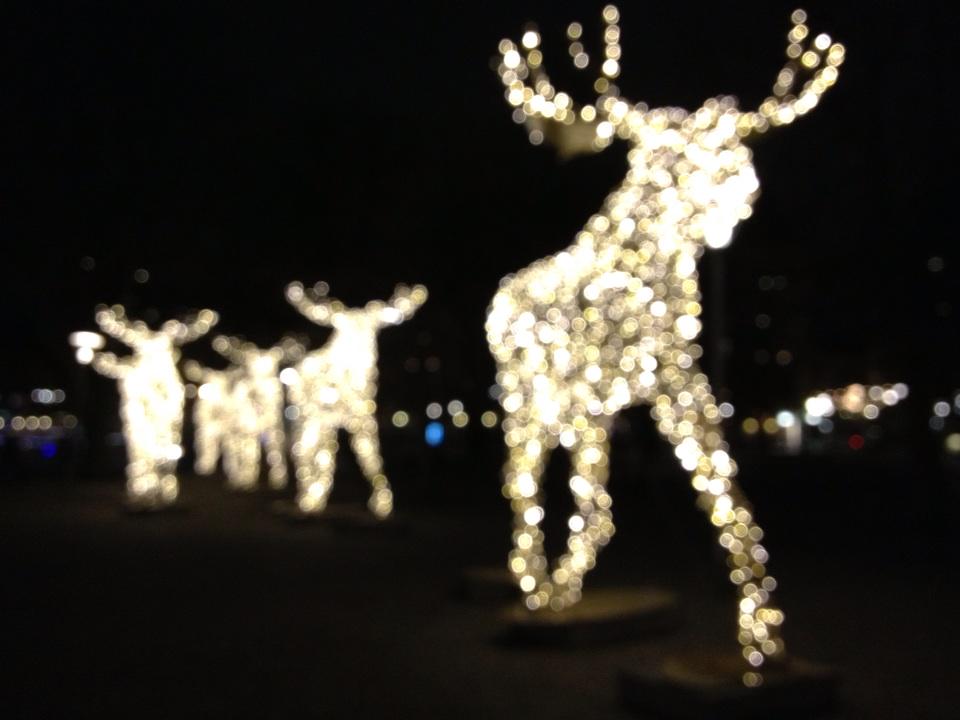 BizSugar articles sprinkled with our sugar

Published by Stefan Engeseth on december 17, 2014

Over 500,000 small business owners have their own site called BizSugar. We are more than happy that that this great community shared several articles inspired by our own sugar content.

Most of these articles were created by BizSugar’s moderator, Martin Lindeskog.

Will Apple introduce a currency 2015 with Steve Jobs on the coin?

Published by Stefan Engeseth on december 15, 2014

Will Apple introduce a currency 2015 with Steve Jobs on the coin?

Published by Stefan Engeseth on december 11, 2014

1. Olympic Games in marketing
2. Theatre vs. Organic food: Flowers from my Mother’s Garden
3. Press release: Ikea will move into fashion next, predicts Swedish author Stefan Engeseth
4. Pampers sponsor sex?
5. Adds for Ikea fashion?
6. AppleCurrency with Steve Jobs on the coin
7. World premier of the first defense business workshop ever
8. Standing still will put you on the menu
9. Who said creating trouble can’t be an effective way for change management
10. How Sir Tim Berners-Lee invented the World Wide Web by cracking the code: Not invented here!

Is IKEA coming out of the closet?

Published by Stefan Engeseth on december 8, 2014

In our last newsletter we released the idea that Ikea should make clothes. It became a viral global hit with up to five articles a day, including in The Guardian and the Daily Mirror.

Along with Jack Yan, publisher of the fashion magazine Lucire I wrote the press release which became more viral than we could have hoped. Many has built on and took the idea further and now there are even ads created for IKEA Fashion. It was really flattering when The Daily Mirror has recommended IKEA to contacts us in order to further grow the idea. We have spawned the idea, however it is up to IKEA to decide if they should come out of the closet or not.

When do you think that this idea will be in your closet?

If it ain’t broke, consider break it

Published by Stefan Engeseth on december 5, 2014

If it ain’t broke, consider break it.
Rasmus Ankersen. Quote from lectuture at Hjärntillskott Executive Day.

Published by Stefan Engeseth on december 2, 2014

When we have started our site DetectiveMarketing.com in 1999 we forgot to include the classical “like” button- maybe it was not so much in use back then… However, we now have realised that we had missed the potential of our millions of visitors who would have liked us and spread the word about our site to their friends.

‘Love’ is a strong word, however ‘like’ is even stronger!
Why? Because ‘like’ is simply telling the world that you love to like something. And if you LIKE us we will simply LOVE you back.

Sir Richard Branson is the keynoter at Hjärntillskott Executive Day. Don’t miss it!

Published by Stefan Engeseth on november 30, 2014

Sir Richard Branson is the keynote speaker together with four other speakers at Hjärntillskott Executive Day during December 3-4 in Sweden. Richard is one  of the rare business leaders in the world who is always willing to move on to new and untapped territories. My guess would be that it was for this reason he gave credits to sharks in his blogpost: Sink or swim. It is not often we get a world-class business icon at this level in Sweden. I look forward to learn from Richard’s swimming lessons. There are still some tickets left for fast movers at Bestseller.

About Sir Richard Branson
In 1970 at age 20, Sir Richard Branson founded Virgin as a mail order record retailer and then as a record shop, recording studio and music label. Since then, Virgin has become one of the world’s most recognized and respected brands, expanding into air and rail travel, leisure and hospitality, entertainment, telecommunications, media, health and wellness, space tourism and clean energy through more than 400 branded companies in 30 countries with global branded revenues of $21B.
In December 1999, Sir Richard was awarded a knighthood in the Queen’s Millennium New Year’s honours list for ”services to entrepreneurship.” Sir Richard has been involved in a number of world record-breaking attempts since 1985. In 1986 his boat, Virgin Atlantic Challenger II, crossed the Atlantic Ocean in the fastest ever recorded time. In August 2012 he completed the last, in a long series of attempts, when he set the record as the oldest person to kitesurf the English Channel.

#richardbranson: To survive, companies have to behave like sharks – if they don’t keep moving they will drown

Published by Stefan Engeseth on november 28, 2014 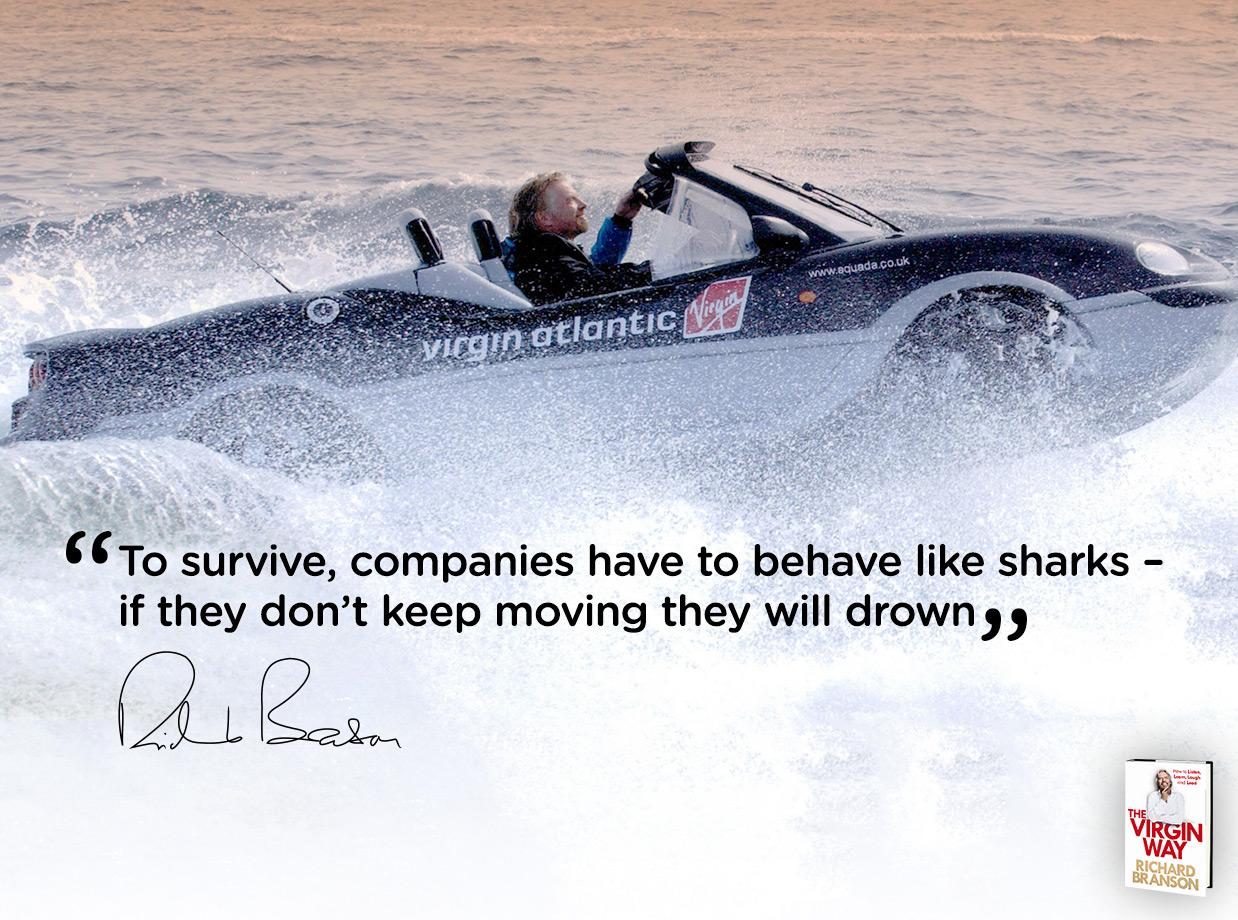 Before I published my latest book Sharkonomics I tried to connect with the best business shark in the world: Richard Branson. This week he wrote a blog post with the headline Sink or swim. Its great that we both like sharks and see the survival points for companies:

To survive, companies have to behave like sharks – if they don’t keep moving they will drown.
Richard Branson

I did not manage to hold an interview with Richard before the book was printed but I did write about him and did mention him as the ultimate shark in every lecture. Would be great to send him a copy of the book (if I get his postal information, the best shark in the business world…).

Here is a part from my Sharkonomics book about Richard:

Sir Richard Branson’s attack-itude
Whatever business field Mr Branson goes into he spreads fear. Why? Because his strike record is a bloody story. Sharks are born killers: they don’t go to school and they don’t need their parents to show them how to eat. They pop out and start to feed on what’s around them; they are born with a natural instinct to attack. The shark’s attitude – best described as “attack-itude” – is one where it moves around its prey with high self-esteem and confidence. I am sure British Airways realizes that Sir Richard Branson’s attackitude is a natural born gift.

Mr Branson has a witty and captivating personality that makes his prey underestimate his striking capabilities. When I had the honour of finally meet Mr Branson, I could immediately sense his attack-itude. His “Virgin shark” has become big and strong. The bigger this “Virgin shark” has become, the more self-confidence it has built up to attack bigger prey. Today Virgin is so big that it is capable of attacking any business in any sector.

When present territories are no longer challenging to attack, Virgin moves on to markets that do not yet exist – like space travel. Being a serial entrepreneur gives Mr Branson the advantage of moving into new territories long before the competition can understand what is happening – and when they sense the attack is coming, it’s usually too late.

Published by Stefan Engeseth on november 26, 2014

1. AppleCurrency with Steve Jobs on the coin
2. Press release: Ikea will move into fashion next, predicts Swedish author Stefan Engeseth
3. World premier of the first defense business workshop ever
4. Who said creating trouble can’t be an effective way for change management
5. How Sir Tim Berners-Lee invented the World Wide Web by cracking the code: Not invented here!
6. The demands for innovation has never been greater
7. From fans to enemy-hooligans
8. Standing still will put you on the menu
9. Adds for Ikea fashion?
10. #tendensdagen: Youtube is turning Internet into an lazy television mirror