My intention is not to spread fear in any form except in boardrooms!

Published by Stefan Engeseth on november 24, 2014

My intention is not to spread fear in any form except in boardrooms!
Sharkonomics

Published by Stefan Engeseth on november 21, 2014

Our Ikea idea are now getting up to five article a day in local parts of the world – fun. Media and bloggers are building on the idea step by step.
Headlines as: Ikea goes fashion! Makes the idea feel like an reality.

Here are some adds that feels like real Ikea adds:

Did find this adds on Italian Fabio Giaca article about the Ikea idea.

This adds from Lublinianki from Poland in an article about the Ikea idea. More adds at Avanti24.

Published by Stefan Engeseth on november 19, 2014

Would you buy flat-pack clothing from Ikea? Business expert predicts future where shoppers pick out clothes from the Swedish store to build at home.
Daily Mail, article by Caroline Mcguire

Published by Stefan Engeseth on november 17, 2014

Last week, a full day Sharkonomics workshop was held at Silvent. Here is the conclusion from the client:

Stefan Engeseth is different. His theories are just as simple as they are brilliant, but above all they are innovative. Stefan made us think differently, think correctly, and think ahead.
Managing Director Anders Erlandsson, Silvent

Published by Stefan Engeseth on november 14, 2014

The media have reported that fans of soccer teams are behaving strangely. Violence is nothing new in soccer, but this time soccer fans are directing their anger against their own teams! Why? Because they don’t think their team is performing in the way they should, so they have transformed from fans to enemy-hooligans. I think we will see the same phenomena repeated for many brands; their fans will turn against them if they believe the brand is not delivering what it should. If brands don’t deliver or score goals of innovation, fans will simply revolt online and offline in shops and perhaps even in the headquarters. Why? Brand leadership means never standing still; always running for the next innovation or development. If fans of one brand experience other brands as being better, they will transform into enemy-hooligans and go against their own brand.
Brands that have seen this happen include MySpace, Ericsson and Levi’s. Apple could become one of them because Apple does not in my opinion understand how fast it must run its innovation when it has so many passionate fans. A predator company could certainly use this to its advantage.

Published by Stefan Engeseth on november 10, 2014

Who said creating trouble can’t be an effective way for change management.
Sharkonomics

World premier of the first defense business workshop ever

Published by Stefan Engeseth on november 7, 2014

Yesterday we held the World premier of our business workshop about defense based on the Sharkonomics defense part. It was really fantastic to see the reactions of the participants – the reaction was so much stronger than we could ever have imagined.
Since our client needs time to implement and change their organization we can not say their name.
What we can say is that they will already today start to create defense and change their corporate DNA.

Our #ikea #fashion idea in The Guardian

Published by Stefan Engeseth on november 5, 2014

Could Ikea-style ‘flatpack clothes’ be the future of fashion?
The Guardian, article by Nathalie Olah

Standing still will put you on the menu

Published by Stefan Engeseth on november 3, 2014

Standing still will put you on the menu.

Published by Stefan Engeseth on oktober 27, 2014 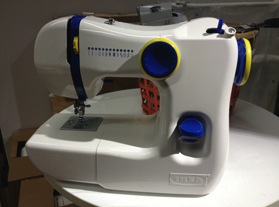