Why can fans build electric cars and not the car industry? 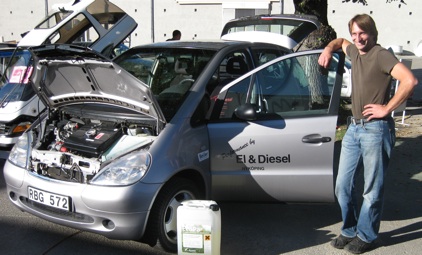 I did wrote a blogpost about consumers who were building and showing their electric cars. Since they had their exhibition in town I went there this weekend. I talked with electric car fan Mats Dahlberg. He has rebuild a Mercedes A140 from 1998 into an electric car. He did this without being an technician! Only having an interest and a curiosity to see if it was possible was enough for Mats. And as you see on this picture it was possible.
I asked Mats how it came that he could build an electric car but the car industry couldn’t? His answer was clear: “Because they don’t want it! The profit of repairing petroleum cars are 0,4 Euros per mile.”
As an environmental friend, he called Toyota Prius a joke! as I interpreted it he meant that the Prius is a smart way to pack the demand for environmental friendly product which let consumers feel and look green. But perhaps for “real” fans of electric cars it is not an good solution but only a good enough start of what is to come. In other words, Toyota Prius is a “look green product,” that makes consumers look and feel green in their community. 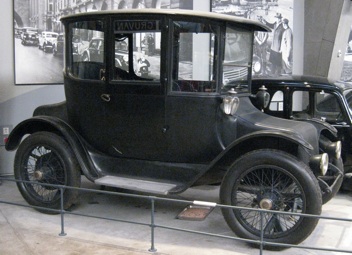 Here is a picture of an electric car which was build in the beginning of the 20th  century. In other words it is an industry which develops slowly.

The question is if finally the time has come for electric cars? With social platforms as Evcast.com and innovative cars as Tesla the future is becoming greener and developing faster thanks to fans as Mats & co.