You never get to old to play, they say. But still most playgrounds are only made for small kids. Not anymore because of a producer from Finland Lappset are making them for the age of 0–100 so three generations can play at the same playground. It has been a success in Sweden and media is reporting of senior starting to play again. In Sweden this is a big thing because old people are more ore less invisible. But this play concept has been successful in Spain and China before it came to Sweden. I do think this is the future, not al of us can ore need to work – but we need to get out, exercise and meet people.

Yesterday I did test it out. Research can be dangerous… Well, I like it but to be seriously this looks a bit dangerous if you are over 65 but at the same time at that age you always live on the edge…

Here is another producer Hags, here they made design playgrounds that more have a function of being an outdoor gym. 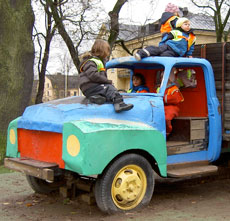 This is another playground, where they use an old truck.  Kids can play on anything.

These playgrounds will also be more ore less a part of our offices. Alan Gregerman did write about the importance of playing at the working offices in his classical book Lessens from the Sandbox.