How Sir Tim Berners-Lee invented the World Wide Web by cracking the code: Not invented here! 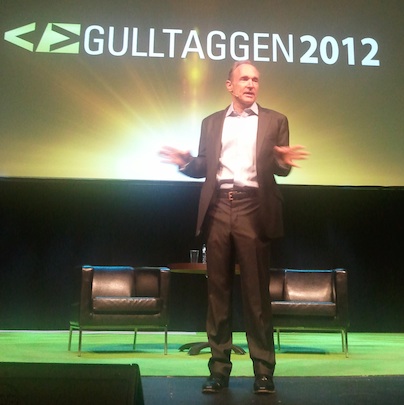 Last week at Gulltaggen I had the honor to listen to Sir Tim Berners-Lee who is the inventor of the World Wide Web. By far it was the best lecture at Gulltaggen (perhaps for ever). His humble statement in the opening of the lecture was superb:

I stumbled on an problem, in which the World Wide Web seemed like a good solution.

Over the years I have had the honor to meet some of the best innovators in the world, like the father of mobile phones: Östen Mäkitalo. When I listened to Sir Tim I released that they all have the same success formula.

They have all cracked the code: Not invented here.
What Tim did when he created the world wide web was that he included existing solutions and codes so that the creators of these solutions and codes could see themselves in the solution that Tim created. That is a smart strategy because it means that other programmers could feel they where a part of the world wide web and could say: We invented it (together). Many of Tim’s points related to Open Source which basically was what the web was about in the beginning. The answer to how to crack the code could not be better expressed than in Tim’s own words:

The should be a sandbox. So everybody could play with it and develop it together and not be stuck in somebody’s head.

If everybody feels they are part of the innovation, they will contribute to the solution and spread it.

We as a spices we have a resistance against ideas that are totally new to us (it takes more energy to absorb and relate to them). The saying “no meaning of inventing the wheel again” can be questioned since new solutions often have already existed in some forms in our heads. For example, the wheel would never have been invented unless there had been earlier prototypes of it.

Big innovators as Sir Tim have many different talents in addition to their own area of expertise (technology in Tim’s case), for example they have knowledge in psychology, group behavior and tribe thinking which they use to spread innovations. Often I get the feeling that big innovators possesses the skills of at least a hundred people, but still the genius solutions these big innovators have invented has taken them years to get accepted and spread. If it takes so many years of hard work although the inventors possess the skills of hundred persons in one person, I wonder how many times we have missed solutions coming from people who do not have as many talents as the big innovators have. I believe that we as a society have to figure out how to better embrace ideas from people who do not have the skills of hundred people but still can offer great solutions. In the meantime we can all enjoy the work of Sir Tim Berners-Lee’s World Wide Web which makes the world spin like a wheel around our future.