How Fans of FedEx can build their business 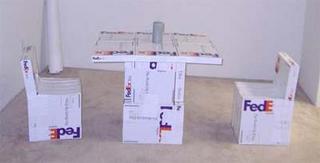 Big companies like FedEx spend millions to get new customers, but when they get them, often the fun stops. Unfortunately this multi billion company didn’t appreciate Jose Avila’s discovery. He used FedEx so frequently that he had about 300 of their boxes lying around. He put two and two together: I have boxes and need furniture so why not make furniture of FedEx boxes? Great idea, and the word spread on the Internet and soon it was a success. He actually invented a way for FedEx to make consumers take part in there environmental responsibility. Sadly FedEx did not like it, so their lawyers hunt him to make him shut down his site, www.fedexfurniture.com. But Jose got help from students at the Stanford Law School Center (this helped the story to grow like a modern version of David and Goliath). Instead of fighting the consumer power, FedEx could work with Jose and move their company forward by being ONE with their consumers. If they did it right they could get loads of positive PR.

Instead FedEx hunted Jose and got loads of negative PR when the story appeared in Wired, CBS, CNN, NBC and many talk shows. Today as a result of bad behavior they suffer from millions of anti-brand stories floating around on the Internet. This attitude from big companies costs millions of brand image dollars and doesn’t increase sales.

To see the big picture is to be a part of the picture,
not only deliver the package from A to B.

To get consumer power to work with FedEx rather than against it, their developers could easily find designers like Sergej Gerasimenko who have been working with cardboard furniture for more than 15 years. Together with Jose and Sergej, FedEx could develop a package that consumers could make FedEx furniture with, and become ONE with the brand. This could be a trend and a movement for other consumers to take part in. For employees at FedEx, it should be an honor to work in a company that is a part of people’s lives, not only delivering package from A to B. It would also inspire their corporate culture to adapt and learn from customers and make them more flexible. For example, if FedEx moved their business into household goods removals (a global, multi-million dollar business) it would be easy: FedEx is already in their consumers’ homes, with furniture made of FedEx (a new dimension of “living your brand”).

Instead, FedEx has to pay millions of dollars to do annoying product placements in movies like Runaway Bride with Julia Roberts. They do product placements to APPEAR as though they are a part of their consumers’ lives. After movies like The Corporation and Super Size Me they could, with their famous David & Goliath story, end up with an “anti-FedEx-movie” (the kind of product placement that would definitely not build their brand). Such a film would be a success with a director like Michael Moore and a star like Jose Avila playing himself. Hollywood only needs to click on this link to see that there is a market for this film (you can imagine how box office sales would do).

Today Jose and other fans have moved out from the FedEx brand (or as some say, ExFed). Sadly José’s site www.fedexfurniture.com isn’t up anymore. We hope that the company who replaced FedEx for Jose, UPS, can work as ONE with this passionate customer. Maybe he and Sergej could design furniture for UPS, and start a site like www.upsfurniture.com with UPS.
Does your company have fans? Are you a fan? Passion is energy – how do you think that energy can inspire the corporate culture of companies? Can consumers increase the bottom line? Is there any bottom line without consumers?