Google Earth is a great service to see the planet in 3D. Today we use flat screen to see the world, but that doesn’t make it round. Should Columbus only use a computer instead of traveling around the planet? And should he found America if he only reduced the planet to 1011001011100? I don’t think so; because of he should be bored to death before he ended up in the wrong place called America. I think the ultimate step for Google Earth to take is to connect people (not buy using Nokia phones), buy using technology to get people to meet and make the world round as the globe and not as flat as the flat screen. 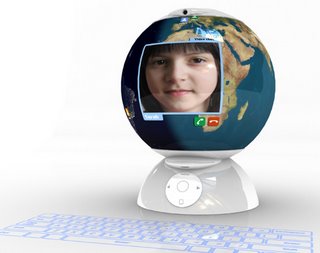 Maybe Google Globe Traveling could use this interesting prototype made by Igor Polyakov. To make the world more round even with a computer (with their service included).

Google is ONE of the strongest brand in the world, if its search brand would go into the traveling business they have to do more than finding the relation be twin A and B. They have to find a new world that I as a consumer newer before have seen. Lets look at an idea for how this Google Globe Traveling could work. Last minutes traveling are as attractive as game lottery with now winners. Bad storytelling means bad business for the traveling business. Here is an idea for how could become ONE with the world and make the consumers a Columbus. As child’s we al have turn a globe and closed our eyes and point a finger to a point and said “ONE day I am going there” then we been dreaming of the place and people. Why not does this as a service? Then consumers can go to the travel partner and turn the globe, point a finger and travel to a new place every time. Some times it will be a please to near and some times a please far away in the dreams where we went as kids.

Be a Columbus and see the world for 900 Euro

This kind of traveling could have a permanent price of 900 Euro (the different in cost will in the long run go around for the companies offering the services). It could also be made on Internet. Every costumer that buy a trip will be sent ore be giving a globe (it is retro and full of potential finger trips…). This kind of “game-traveling” will build and feed the story and also make the world more round as the globe.
How will be the first to offering the service? Should you try it? How would it make the employees educate it self and enjoy there work? Today the world is in many ways still flat mentally, how could this service help it be more round? Traveling and charity is working good together, how could charity connect with the Google Globe Traveling? Should the name instead be Google Columbus (what do you think)? How would this service build story telling?