Published by Stefan Engeseth on oktober 19, 2012

While analysts are treating Apple’s 4th consecutive week of losses on Wall Street as an investment issue, I think the company has bigger problems on the horizon.

Apple is becoming a top prey in the world of Sharkonomics.

Applying the principles of nature to business, sharks typically attack over-hyped companies with too many products, perceived strength that might not really be there, a temporary lack of competition, and leadership that isn’t moving as fast as the surrounding environment.

Here are 6 ways I see a shark-attack on Apple going down:

1.      A lead bite.  Sooner or later, Samsung’s advantages in product functionality will convince executives to stop following Apple and comparing products.
2.      Open-water pursuit.  Apple has been feeding in the same waters forever.  I compare its customers to the poor folks in Jaws, who were forced to spend the 4th of July either swimming in a limited area beach area of Amity Island or not swim at all.  Apple’s business model locks people into their solutions and eventually, a competitor will offer new software, new hardware or cross-over functionality between popular apps and other mobile products.
3.      Too much kicking.  Apple is doing lots of things like launching the iPad mini, but more of the same might end of making the company an appetizing target for sharks.
4.      Bite from a great white.  The world’s top CEOs can go into any industry and create a successful company.  They are visionary, which ironically is exactly how Apple became a powerhouse.  I’ll closely be watching what Richard Branson, who just offered the iPhone4 as a product for Virgin Mobile customers, will do in the coming months.
5.      Bite through the shark cage.  I teach companies the difference between “protection” and “defense.”  For example, people in shark cages often assume they are protected, while those who swim with the sharks know that is not true.  In Apple’s case, they over-protecting the past and not defending the future.  With very little difference between the iPhone4 and 5 and lots of the same corporate visuals, Apple looks stuck in its own history.  Meanwhile, sharks are continuously on the move, and although this might sound slightly cold, they are not sentimental.
6.      Eaten by its own school.  Sharkonomics equates Apple fanatics to a school of shark swimming with the leader.  But there is a blind spot to this approach.  Apple does very little to educate retailers about new products until they are already in the market.  With more products than ever, what does this mean for customer service and the overall consumer experience?  If a competitor like Samsung incorporates a better customer service component with a better technology solution, Apple’s school of followers might end up eating the company and moving to an alternative leader.

Praise from New England/Boston premier of the Sharkonomics US tour

Published by Stefan Engeseth on oktober 18, 2012

On behalf of SACC-NE, I wanted to thank you for an excellent Sharkonomics presentation. Not only were you able to captivate and entertain the fifty people attending, but I had several members reach out to me afterwards commenting on the great energy in the presentation. Your ability to distill core shark principles and apply them to businesses at different stages in their life cycles was both challenging and inspiring.

Published by Stefan Engeseth on oktober 15, 2012 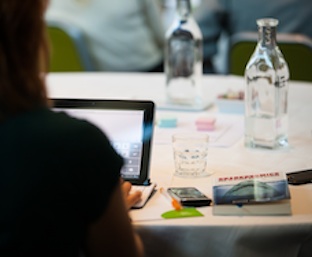 Recently I had the honor to be the opening speaker at IRM’s conference: Business Model innovation 2012. Even if I wish I was the reason why top management from Ericsson and other leading companies came to this conference, I have to to admit that I was more of an opening act for the world class speaker Alexander Osterwalder. My Sharkonomics speech was focusing on why companies need to move in order avoid becoming sharkfood. Alexander showed how to move by using Business Model innovation. His way of making the audience work is world-class.

During the day Alexander reflected and included my speech in this full day workshop with expressions like:

Alexander took a bite into the shark thinking and reflected often with references such as the blue and red ocean strategy.

Another of his excellent points was to start move management out of the box they are stuck in. There are often too many barriers in management blocking CHANGE.

Here are my favorite expressions from Alexander:
• Writing business plan is carrier suicide.
• Rest in peace.
• Prototype different thinking.
• Apple did not know.

After the lecture I asked him about one of his one-liners: “Failure is part of the learning experience.”
He explained that learning is the goal with failure. The goal is to fail cheaply. Willing to fail allow a learning strategy.

I would love to see the first university that graduates student in failure MBA. It will happen if thinkers as Alexander puts failure into the business model.

Thanks to IRM for arranging
this excellent seminar.

Published by Stefan Engeseth on oktober 13, 2012

Will Kraft-Mondelez practice cannibalism by competing with themselves?

Published by Stefan Engeseth on oktober 10, 2012

After Fox Business headline: After Breakup, Kraft, Mondelez Embark on Separate Paths. My Sharkonomics opinion on that move:

Big corporations often practice cannibalism by competing with themselves. These types of solutions might work work fine on a white board but often not in the nature of real business life. The short time consequences can be losing brand strength and weakening corporate culture, which can attract competitors who can sense opportunities to bite into market shares.

Published by Stefan Engeseth on oktober 8, 2012

Published by Stefan Engeseth on oktober 6, 2012

Published by Stefan Engeseth on oktober 1, 2012

Check out the Sharkonomics bus and its USA tour

Published by Stefan Engeseth on september 28, 2012

The question is where the tour bus will stop next in the world?

Published by Stefan Engeseth on september 26, 2012

Check out this video with Scott Bedbury Founder and CEO at Brandstream. He is keynote speaker at Tendensdagen and will lecture in the topic: Creating a Superhuman Brand – Unleashing human potential and meaningful brand storytelling in the New Brand World.

Another speaker I would recommend to check out is: Susan Fournier, Associate Professor of Marketing, Boston University. Speech topic: Getting Inside the ”R” in Customer Relationship Management. The speakers are impressive but for me this day which is arranged on the 25th of october this year is one of the best tribe meetings in Scandinavia. Read and mingle more at Tendensdagen.