Published by Stefan Engeseth on oktober 28, 2013

PS. Zoom the picture to read in Finnish.

Published by Stefan Engeseth on oktober 24, 2013 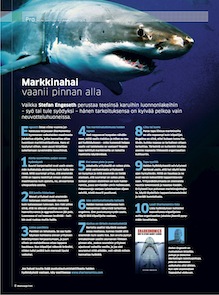 Sharkonomics is jumping high in Finnish business press, here in Otava Media in page 8 (or as pdf).
Article by Heini Santos.

Published by Stefan Engeseth on oktober 21, 2013

Attacking from the clouds

Published by Stefan Engeseth on oktober 15, 2013

Today a lot of business sectors – such as finance, CRM, bookkeeping, data storage – are protected because of the large investments required to develop them. They have grown safely into market leaders because their competitors have been unable to make the necessary investments to compete with them. But now as these IT investments move into the clouds, there will no longer be any obstacles to protect market leaders from competition – for clients and consumers it means freedom of choice.

As a result, predator software companies will move up the food chain, devouring market share in sectors such as finance. Services previously protected by barriers of entry will no longer be a problem for such predators.

Published by Stefan Engeseth on oktober 10, 2013

This week I listened to an exclusive lecture by Frida Fahlgren at LinkedIn. She told us about a lot of the factors that makes LinkedIn a success. The funniest part of the lecture was when she referred to her niece Alice’s (15 years old) reaction when she told her she was working at LinkedIn:

It´s like Facebook, but for seriously old people!
Speech quoted with permission from Frida Fahlgren, employed at LinkedIn

Published by Stefan Engeseth on oktober 7, 2013

In every industry there are a number of people who are more successful than others, the cause is often credited their skills. Though really builds their success is often just the simple factor that they are the best at relationships within the industry. They have found the formula to convert its currency relative to cash.

These extremely socially gifted people in every city, every industry and has always functioned as a social engine. Before it was in the caves today give social media these people a platform to expand their relationships from hundreds to thousands of friends. As these individuals serves as a Facebook on two legs, affects their relationships economy so much that this value can be compared with a currency, a currency relationship.
Relationships can this value be an industry that is only aimed at bringing relationships into cash. Unethical says many but today, Facebook and other proven that it is possible to make money right relationships – what they all made the connection to the offline world that is far greater than online.
Banks should create an exchange of relationship currency, then companies would be able to invite people who have relationship currency to exchange at various customer events. The people who have 3000 + friends on platforms such as Facebook is more than you think. With a value linked to their social skills, they can together establish a trade. Relationship currency may also suffer inflation that reduced the value of relationships in the value far exceeds the person’s skills, then incompetence make relations vulnerable to more skilled competition. The effect can then lead to the amateur is more competent than the professionals is often the case in social media.
The only question is where currency value should be compared with the Euro and U.S. dollar?

Published by Stefan Engeseth on oktober 3, 2013

Published by Stefan Engeseth on september 30, 2013 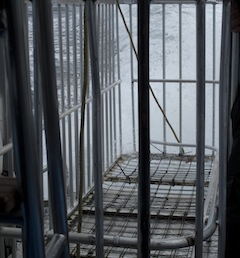 Anyone who has something, also has something to defend. But in the corporate world ideas about defense exist neither in training nor in practice. Still, there ought to be a defense strategy for every business and marketing plan.

How many liked to be goalkeeper in school when playing football? But not many matches are won without a goalkeeper. The same is true for the corporate world. We train people to conquer the market, but not to defend it. We are programmed to look in one direction while our long-term earnings are more related to the goalkeeper than we would like to admit.

Many are market leaders because they’ve got an advantage through patents, innovations or staff. All these benefits will eventually cease, and success itself might turn into a disadvantage as it tends to spoil the organization and breed arrogance. Swedish Spotify and Skype were, and are, creators of something, but also creators of competitors. Many people ask us when they will be attacked, and we answer that they will be when they swim slower than others in their surroundings. The time it takes for competitors to copy and catch up is so short, that it is not worth it to be a new player if you cannot defend yourself. You just become an external development team for competitors and defectors.

In nature, all predators have strong defenses. We now hear from many companies who want to focus on defense in Sharkonomics. Market leaders see that they are more prey than predator and want to learn defense so that they will not end up like beached whales.

How you defend your market with Sharkonomics’ 10 strategies:

1. Develop your defense strategies years before you get attacked
2. Never stand still
3. Let others spread the buzz
4. Don’t panic when under shark attack
5. Find out where your blind spots are
6. When entering a new market, don’t send out press releases too early
7. Sharks will not attack you if there is an easier target around
8. Don’t act like a victim
9. Attack is good defence
10. Develop better escape tactics than the hunter

Published by Stefan Engeseth on september 25, 2013

1. How Sir Tim Berners-Lee invented the World Wide Web by cracking the code: Not invented here!
2. Why woman can rule Internet
3. Hire fat people in health food stores
4. If Apple would start a bank it would happen over one night
5. Can you see yourself in today’s brands or products?
6. A fashion flash-mob in supermarket
7. Tablet War Week: Will look small if Facebook jumps in the water
8. Will Iron Maiden sing to the Sharkonomics hit?
9. From BtoC to BtoB into BtoG(EEK)
10. 6 Ways Apple Becomes Prey for Sharks

Published by Stefan Engeseth on september 23, 2013

I have the pleasure to be Key note speaker in Finland at Reboot Camp, topic Sharkonomics. It is in Wanha Satama Helsinki 7th of November 2013.

REBOOT CAMP is a new business event concentrating especially in B2B customer relations. Event consists of top speakers and current customer experience seminar programme as well as the biggest service providers. New event format allows the participants to meet the cooperation partners through live networking game. The event is targeted to the directors and managers of customer experience and marketing, sales and business development.
Reboot Camp